Continuing my series of character profiles, Eve Durandt is the heroine of What He Never Told Me.  The daughter of a widowed American diplomat, Eve grew up around the world in such places as Austria, South Korea, Afghanistan, France, and Guatemala.  At twenty-three, Eve has just begun a PhD program in Anthropology at St Andrews in Scotland and is dating the son of a Russian diplomat.  When her boyfriend Yuri proposes, Eve decides it's time to bridge some of the distance between her and her father, her only living relative.  She says goodbye to Yuri and flies down to Northern Italy to spend a weekend with her father, recently posted to the US Embassy in Tirana, Albania.

Due to the nature of her father's work and personality, Eve has a shaky relationship with her dad and an even more volatile one with her home country.  She doesn't feel at home anywhere as her life has been spent in various multicultural settings (often at boarding school).  Her global perspective has resulted in some disdain for American culture, and in her view, America's ongoing wars in the Middle East are tragic if not outright harmful.  This is later highlighted when she encounters Hale, an American raised in rural Oklahoma and a recent veteran of Afghanistan who is very proud of his country.  As shadows from her past challenge her understanding of the world around her, Eve must decide what she is willing to risk to preserve what she believes is true.

And of course, my current pick for Eve's look-alike: Liraz Charhi. 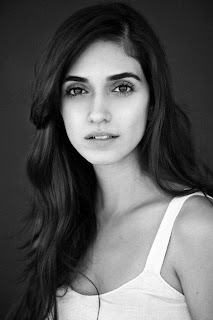 Labels: Adventure, character profile, What He Never Told Me