Sailing on the Dawn Treader 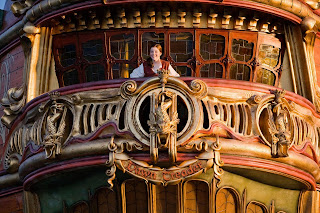 But a lot of that depends on us.
﻿﻿﻿﻿
The NarniaFans website says it's crucial that Dawn Treader gets the votes at the box office in order for Fox to make any more in the series.
My dream is that they finish out the rest of the series. As a child, I felt so forlorn watching the end of the BBC's version of The Silver Chair, since I knew it was the last one they were making of the series.  I so want to see The Horse and His Boy on the big screen (it's CS Lewis, it's a good fantasy story, and mostly because it's an excellent Horse Story!)
Mr Amazing Dude and myself just got back from a matinee showing of Voyage of the Dawn Treader, and I'm still sailing on my happy movie high.  I loved it! The story was solid, the cast terrific (happily, Eustace was not as annoying as he is in the book and Lucy shows up plenty), and the CGI effects are absoutely stunning.  There is one scene where the ship appears to be treading on the edges of dawn and it's lovely. :-)  Who wouldn't want to sail on a ship as awesome as the Dawn Treader!
Dawn Treader recaptured the spirit of The Lion, the Witch and the Wardrobe that had been lost a little in Prince Caspian.  In many ways, the movie was more fanciful and freer than it's two predecessors.  While changing some of the story line (nothing really major), the movie faithfully stuck to Lewis' intent and didn't veil the spiritual content of the story.  Watching the story reminded me of why I love weaving tales together.

If you haven't seen it and you enjoy a good adventure story with a beautiful ending, I highly recommend taking a short trip on the Dawn Treader.  You won't be disappointed with the view.